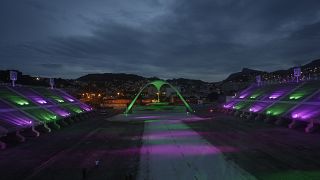 A samba group in Brazil have put on a symbolic performance to pay tribute to coronavirus victims as they marked the inauguration of Rio de Janeiro's carnival season - a series of events that has since seen many cancelled due to the pandemic.

Nilcemar Nogueira, director of Rio's Samba Museum, says the performance provided an opportunity "to demand that there be a political and cultural program that includes and listens" to Brazil's sambistas and black population.

Numerous lights illuminated Rio's Sambadrome in the colours of the samba schools as the performance got underway.

"To have love for our neighbour in these coming days is to avoid crowds, not going to parties, not having street parties, enjoying carnival in a different way," said Rio's mayor Eduardo Paes.

The state of Rio, meanwhile, has 16.5 million inhabitants, and is the second most-affected of Brazil's 27 states in relative terms, surpassed only by the Amazon.