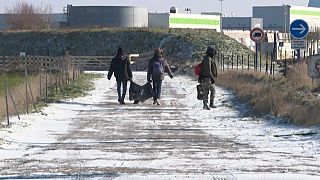 Despite temperatures plunging across a swathe of northern France this week, migrants in Calais are willing to risk the freezing cold for a chance to cross the channel into the UK.

Migrants struggle with freezing tents and clogged taps in make-shift camps, yet some of them still prefer to brave the cold rather than take advantage of state-provided "shelters", so as not to miss an opportunity to go to England.

Babaladé, a 31-year-old Somali migrant is struggling with the recent cold snap. "I sleep in a tent. Even the tent is frozen. To get out I had to tear it open because the zipper was blocked."

Authorities have opened emergency shelters where the migrants can get a hot meal and a bed for the night. Local NGOs claim little information has been made available about sites and say migrants won't use them if they are located too far from crossing sites.

Yann Manzi is the vice-president of NGO Utopia56.

"What's happening in Calais and Grande-Synthe is quite simply shameful," he says. "They make people believe that they are opening up certain centres, with great fanfare, centres that migrants do not want to go to precisely because it is too far from the crossing sites. They want to go to England, we've been looking at this system for years, and it doesn't work."

According to Utopia56, around 500 migrants are currently living rough in the Grande-Synthe area north-east of Calais.

With temperatures in the north of the country expected to fall as low as -15°C this week, it seems even the bitter cold can't dampen the desire of trying to make it across the channel.

An easing of winds overnight helped the Fire Service contain several blazes in different parts of Greece. According to the Fire Service, 52 wildfires broke out on Monday, stoked by strong winds and high temperatures.