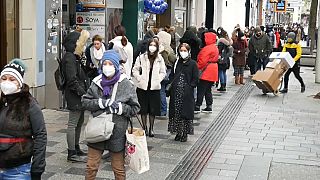 For now, the hard lockdown in Austria is over as stores, schools and personal services are allowed to reopen. According to the government, the lockdown rules have had little effect on curbing the number of cases lately.

So in a European first, Austria is introducing mandatory 'entrance testing' where clients of hairdressers and other service providers will have to provide evidence of a negative COVID-19 test, as a new tactic against the pandemic.

Austria is considering extending this new concept of entrance tests to other areas as well. This means that anyone who doesn't get tested will soon be banned not only from the hairdresser's but probably also from the theatre or cinema.

To make this possible, Austria is massively increasing free testing facilities, whether in the Schönbrunn Palace, the nearest pharmacy, or offices.

"This access test is an absolute innovation. If it works, it will mean that we have a very very broad testing of the population every day, which means that it's not a certain section of the population that is particularly committed that goes to a test, but that de facto almost everyone goes to the test," the Austrian health minister, Rudolf Anschober said.

In light of the relaxations, fierce criticism is coming from neighbouring Germany. CSU leader Markus Blume said on Twitter, "Austria and the Czech Republic endanger our successes in Germany with their irresponsible opening policy."

Most recently, Bavaria also considered shutting down its border with Austria, in part because of South African virus mutation cases in Tyrol. Meanwhile, Austria has tightened border controls and defended its new strategy.