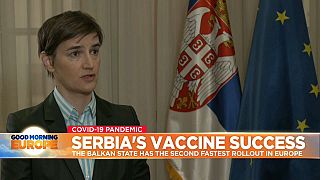 Serbian PM: Vaccine success down to prioritising health over politics

Serbia has made a meteoric start to its vaccination rollout - the second fastest in Europe behind the United Kingdom.

Lying outside of the EU and its joint procurement programme, Belgrade has secured a million doses of the Chinese Sinopharm vaccine, alongside shipments of Russia's Sputnik V and the Pfizer/BioNTech jab.

"We decided to run fast on all possible tracks," said Serbia's prime minister Ana Brnabić in an interview with Euronews' Bojan Brkic.

“Early on we were on involved in all of the processes regarding vaccines. We donated 2.1m euro through the EU Commission for the development of vaccines. Early on we participated in the COVAX scheme of the World Health Organisation. But in addition we thought it would be prudent to enter into bilateral talks with all vaccine producers to make sure our citizens early on get as much of the vaccine as possible," Brnabić outlined.

"We were one of the first five countries to sign a contract with Pfizer/BioNtech. And we also signed for Sputnik V also for the Chines vaccine Sinopharm. We were the second country in Europe to get the first dispatched of the Pfizer vaccine immediately after the UK."

Asked about her concerns regarding the safety of the Russian and Chinese vaccines after Serbia approved them before the documentation was delivered to the EU, she says that Serbia obtained "some samples of all the relevant vaccines for our authorities to check and we went with the emergency approval."

Neither the Chinese or Russian vaccines are currently authorised for use across the EU, but they have been approved by one of its members, Hungary.

The latest data shows that 6.4 doses have been administered per 100 people in the Balkan state. That's higher than any EU state.

"I think Serbia was one of the few countries that looked on vaccine purchase and distribution as a healthcare issue and not a political issue. That’s why we are that successful," the prime minister said.

"The only relevant matter for us being is it safer and effective," Brnabić continued, adding that she expects to be part of the EU rollout of vaccine batches soon.

Watch Bojan's full interview with Ana Brnabić in the media player at the top of the article.