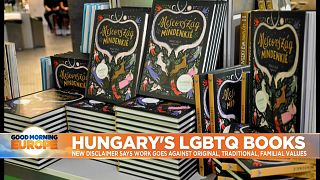 In Hungary, authorities have decided to force a disclaimer onto a book launched by a sexual minority rights publisher.

Prime minister Viktor Orban, whose right-wing Fidesz party has adopted increasingly hostile rhetoric and policies towards LGBT groups, called it “homosexual propaganda.” The disclaimer states that the fairytale conveys values that are different from the original, traditional, familial, values of Hungary.

Luca Dudits thinks this ruling is discriminatory. She is the Communications Officer at Háttér Society, a non-governmental LGBT organisation in Hungary.

"The whole ruling is completely discriminatory and unconstitutional because to just slam a book that depicts characters from marginalised social groups is just completely discriminatory. Our issue is that you cannot just say that consumers need to be warned that the book is depicting behavior deviating from traditional gender rules as the ruling says - because this is not something a democracy can do."