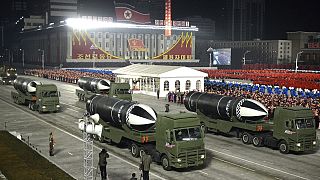 North Korea rolled out developmental ballistic missiles designed to be launched from submarines and other military hardware in a massive nighttime parade.

At the congress, Kim said the North had completed plans for a nuclear submarine, but any such vessel is likely to be years away from going into service.

Analysts say the North is using the party meeting and military display to send the incoming administration in Washington a carefully calibrated message of strength in an attempt to extract concessions.