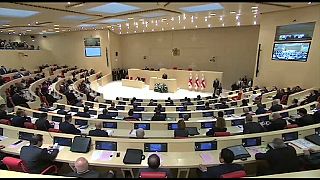 The Georgian Parliament has passed an amnesty law, which will release 1,500 prisoners and see the sentences of a further 6,000 reduced.

The law pardons inmates convicted of crimes including theft, fraud and some drug offences.

It comes amid an ongoing political crisis in the country.

Georgian Dream was the only party to vote on the bill, as opposition parties continue to refuse to enter parliament after October's disputed election.

Thorniké Gordadze, Lecturer at The Paris Institute of Political Studies and Former Minister of Georgia's European integration says, "We should emphasize on the ongoing political crisis in Georgia to understand it. The nine opposition parties don't recognize the elections. There is one ruling party in parliament."

"The opposition claims Georgia Dream passed this law as a payback to the criminal world for the help they got during the election. In the past criminals have helped the ruling party by pressuring people during the campaign."

Watch the interview with Thorniké Gordadze in the player above.