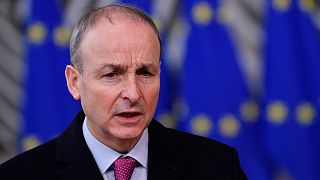 Harrowing report reveals how 9,000 children died in care in Ireland

A long-awaited report has laid bare the harm done by Ireland's homes for unmarried women and their babies.

It found that 9,000 children died in 18 different mother and baby homes during the 20th century.

Fifteen per cent of all children born in the homes died, almost double the nationwide infant mortality rate.

Church-run homes in Ireland housed orphans, unmarried pregnant women and their babies for most of the 20th century. The institutions have been subject to intense public scrutiny since 2014 when historian Catherine Corless tracked down death certificates for nearly 800 children who died at the former Bon Secours Mother and Baby Home in Tuam, County Galway in western Ireland -- but could only find a burial record for one child.

Investigators later found a mass grave containing remains of babies and young children in an underground sewage structure on the grounds of the home, which was run by an order of Catholic nuns and closed in 1961.

Women were often sent to the homes out of shame; as the report finds being an unmarried mother would eliminate prospects of marriage for any woman. Some pregnancies were a result of rape; some women had mental health problems, some had learning difficulties. And their lives were blighted by pregnancy outside marriage.

The Commission of Investigation into Mother and Baby Homes and Certain Related Matters was established by Government in 2015 to account for what happened to women and children in these homes during the period 1922 to 1998.

High rates of infant and child mortality are a marked feature of the mother and baby homes under investigation. This is especially so in the earlier years of their existence.

Despite describing the harsh nature of the homes, the report found responsibility for that treatment rests mainly with the fathers of the children and their own immediate families.

The homes were supported by, contributed to, and condoned by the institutions of the state and the church, but mother and baby homes “provided refuge” – a harsh refuge in some cases when the families provided no refuge at all.

Mary Harney was born in the Bessborough Mother and Baby home in 1949 in County Cork.

Her mother had been sent there alone, aged 19, after she became pregnant and was unmarried. Mary was forcibly adopted two and a half years later.

“I was lucky enough to trace my mother so I have nearly 31 years of a relationship with her until she died in 2014.

"She had a very hard time in delivery and no medication was given to her. She was told she had to pay for her sins for having had sex outside of wedlock.

"When I was born, I was so weak and they put me into what she called 'the dying' ward for babies that wouldn’t survive."

Indeed, as the report starkly points out that, in the years before 1960, "mother and baby homes did not save the lives of ‘illegitimate’ children; in fact, they appear to have significantly reduced their prospects of survival".

But Mary did not suffer that fate.

"I confounded all expectations and they brought me to her and we bonded. But women weren’t allowed to see their babies when they wanted. It was conditional on the nun’s permission."

While other babies were being taken to be sent to America, Mary had developed a communicable disease which she believes prevented her being adopted. As a result, Mary and her mother spent the first two and a half years of Mary’s life together in Bessborough, County Cork.

“Then one afternoon she was given about a half an hour’s notice to get me dressed and she was told I was leaving. She dressed me in little clothes she had knitted for me. The nuns took me down the corridor and handed me over to an elderly woman. I was being fostered to an elderly couple. They weren’t asked to sign anything – my mother never signed anything.

"My mother said the hardest thing and the most humiliating thing for her was that she had knitted all my little baby clothes. and after I was handed to the foster woman the nuns brought back the little clothes that my mother had knitted for me and threw them in her face and said Mary won’t be needing these."

Watch the interview with Mary in the video player above.

What has the reaction been?

Irish Prime Minister Micheal Martin said he would make a formal apology on behalf of the state in Ireland's parliament on Wednesday.

He said young women and their children had paid a heavy price for Ireland’s “perverse religious morality” in past decades.

“We had a completely warped attitude to sexuality and intimacy. Young mothers and their sons and daughters paid a terrible price for that dysfunction,” he said.

The inquiry is part of a process of reckoning in overwhelmingly Roman Catholic Ireland to come to terms with a history of abuses in church-run institutions, including the shunning and shaming of unwed mothers, many of whom were pressured into giving up their babies for adoption.