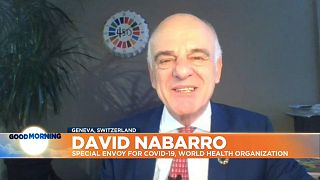 The World Health Organization's special envoy for COVID-19 has said that a team from the organisation looking at the origins of the virus was unable to enter China due to a "visa slip-up".

The process of setting up the mission is what has taken a long time, according to Dr David Nabarro, as "organising these types of visits is not an easy task".

China blocked the entry of the WHO team even as some members were travelling to the country, saying that their visas had not yet been approved.

Nabarro labelled this a "slight slip-up in terms of logistics" in what is an "extremely complicated international investigation".

But WHO’s director-general Tedros Adhanom Ghebreyesus previously voiced his concerns calling on the Chinese to let the team into the country.

“I’m very disappointed with this news, given that two members have already begun their journeys, and others were not able to travel at the last minute,” he said.

Nabarro asked when the WHO team would be let into the country, responded: "I don't know, let's hope it is soon."

He added WHO was in "in regular correspondence with Chinese colleagues to try and make certain that this gets remedied as quickly as possible".

Watch Euronews's full interview in the player above.