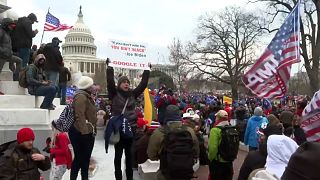 There was confusion in the House chamber as the Capitol doors were locked and the debate over the electoral count was suspended.

A representative from the Capitol police spoke from a lectern on the dais and told lawmakers to remain calm, and that more information would be available soon.

The protesters stormed the Capitol shortly after Trump addressed thousands of his supporters, riling up the crowd with his baseless claims of election fraud.

Protesters could be seen marching through the Capitol’s stately Statuary Hall shouting and waving Trump banners and American flags.

Some House lawmakers tweeted they were sheltering in place in their offices.

Police regained control a few hours later and Trump accepted that his term in office was coming to a close, while still maintaining claims of electoral fraud.