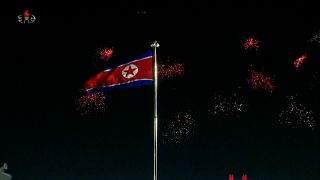 North Korea welcomes in the new year with a fireworks display

Singing, dancing and fireworks welcomed in the new year in the North Korean capital Pyongyang.

Crowds wearing face masks listened to the North Korean national anthem as the national flag was raised at midnight.

There was then a short firework display, which was broadcast live on state television.

North Korea under leader Kim Jong Un has developed a routine of fireworks shows for New Year's Eve and other major anniversaries and holidays.