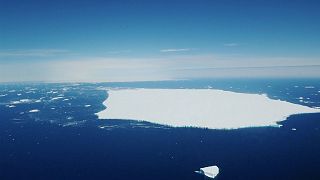 Huge iceberg in South Atlantic begins to break up

Recent satellite imagery has suggested that one of the world's largest icebergs had, as predicted, grounded out on the oceanic shelf and begun to break up.

During a routine patrol to the region, an aircraft from the British Forces South Atlantic Islands (BFSAI) was able to investigate further.

As the current around South Georgia spun the iceberg, labelled A-68a, a large section broke off.

The new section, which is approximately the size of a small island, is so big it has been given its own label — A-68d.

A-68d is now roughly 55 nautical kilometres away from South Georgia.

With the backdrop of South Georgia's mountains, the new iceberg is an impressive, yet potentially hazardous, addition to the scenery.

The true nature of the threat of this iceberg to the wildlife haven of South Georgia is still being assessed and will attract ongoing interest from the Antarctic scientific community during its journey.

Further monitoring of A-68d will determine whether it is stationary on the shelf or continuing around the island.

The parent berg, A-68a, continues on the Southern Ocean current on its easterly course.