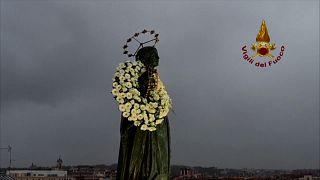 Pope Francis paid a surprise visit to the statue of the Virgin Mary in Rome on Tuesday to pray for people worldwide struggling in the pandemic.

The statue is on top of a column near the Spanish Steps in Italy's capital city.

After laying white roses at the bottom of the column, Francis spent a few moments in silent prayer. His visit marked the Catholic feast day of the Immaculate Conception.

The day is an official holiday in Italy and at the Vatican.

Italian firefighters climbed a ladder to position a wreath of flowers on the statue's arm after the Pope left.

Francis “turned to [Mary] in prayer, so that she may keep watch with love over Rome and its inhabitants, entrusting to her all those in this city and the world who are afflicted by the [COVID-19] illness and are discouraged,” Vatican spokesman Matteo Bruni said in a statement.