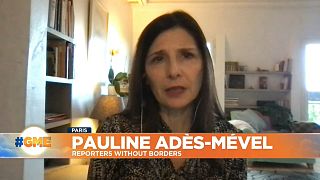 France's decision to revisit proposed rules on photographing police officers is welcome, but more work is needed to protect journalists from prosecution.

Pauline Adès-Mével, the editor-in-chief at the journalism NGO Reporters sans frontières (Reporters Without Borders), said the government's move to rewrite security measures in the controversial Article 24 was "going in the right direction".

The measure proposed making it an offence to film and identify officers online if there is "intent to harm their physical or psychological integrity".

But opponents say the article's ambiguity raised fears that it would allow the police to stop journalists at work — for example, by reporting live from the scene of a crime.

Adès-Mével told Euronews on Tuesday: "We totally understand what the police is expecting and we do understand that police need to be protected, but the burden is currently on press freedom and journalists.

"So we need some measures that allow journalists to do their job on the field without being prevented to go live, or to be thought as having an intention to harm."

She said that the main concern among French journalists was that the "intent to harm" provision would prevent them from doing their job.

"This 'intent to harm', whatever it is, is a slippery measure," she said.

"How can you figure out what a journalist will do with his pictures? So if a policeman stops a journalist from filming… he won't be able to continue his shooting, and it will have a chilling effect.

"That's one of the main things we fear, plus multiple arrests on the field for journalists."

In an apparent effort to quell the unrest, the head of President Macron's party at the National Assembly, Christophe Castaner, agreed to a complete re-write to clarify the bill.

France's Interior minister Gerald Darmanin has defended his position before a parliamentary commission and refused a total withdrawal of the bill.

Advocates say the article - passed by the lower house last week - will protect police from harassment and targeting on social media.