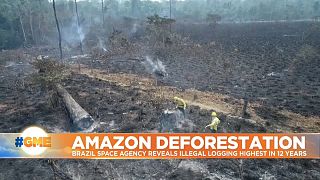 Deforestation in the Amazon is at its highest level in twelve years, according to new data from the Brazilian National Institute for Space Research.

The 11,088 square kilometres that were deforested between July 2019 and August 2020 marks an increase of 9.6% compared to the previous year.

The figures were the highest since 2008 when 12,911 square kilometres of the forest were destroyed.

Jair Bolsonaro, Brazil's far-right president, is a notable climate sceptic who has come under heavy criticism over his management of deforestation.

"The Bolsonaro government's vision of development for the Amazon takes us back to the past, with deforestation rates not seen since 2008," said Greenpeace's Cristiane Mazzetti in a statement.

"It is a backward view, which does not speak to most Brazilians and does not match the efforts required to deal with the climate and biodiversity crises."

Greenpeace has said that if Bolsonaro's 2021 budget passes, environmental agencies would "suffer a 35% budget cut".

Brazil's vice-president, Hamilton Mourao, said he was expecting the data to be worse.

"The estimate we had was even more negative than this result we are presenting. We estimated we would have an increase of 20% of deforestation compared to last year," he said.

The Amazon is the world's largest rainforest and plays a critical role in the fight against climate change since it absorbs carbon.

US President-elect Joe Biden said in an election debate that Brazil should suffer economic consequences if deforestation continued.

Watch Euronews' full report in the player, above.