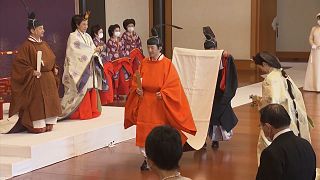 Japanese Emperor Naruhito's younger brother, Crown Prince Fumihito, was formally sworn in on Sunday as first in line to the Chrysanthemum Throne.

The swearing in took place in a palace ritual that was postponed and scaled down due to the COVID-19 pandemic.

The ceremony for the 54-year-old crown prince, better known as Prince Akishino, concludes a series of imperial succession rituals that began in May last year when Naruhito ascended to the throne after their 86-year-old father Akihito abdicated.

Inside the palace’s most prestigious Pine Room, Naruhito, 60, declared that his younger brother is now officially the crown prince who is first in line to succeed the throne of the world's oldest monarchy.

The ceremony lasted 15 minutes and had been originally scheduled for April 19. The 50 attendants included Prime Minister Yoshihide Suga.