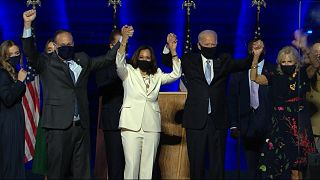 After President-elect Joe Biden gave a victory speech, he and Vice President-elect Kamala Harris were joined by their families. They celebrated with a full a fireworks display.

Drones spelled out the Biden logo and formed a map of the United States.

The two Democrats celebrated alongside their families, Biden with his seven grandchildren, son and daughter and Harris with her husband, step-children, sister and niece.

Supporters cheered and watched on at the drive-in style event, meant to encourage social distancing due to the COVID-19 pandemic.

But it quickly became a large outdoor party as people celebrated a victory that was determined four days after the election.