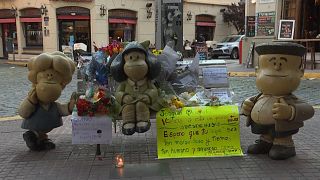 Under the pseudonym Quino he created Mafalda in 1964, and the strip became popular in newspapers in Latin America, Europe and much of Asia before being published in books.

"Quino has died," wrote Daniel Divinsky, director of the Buenos Aires publishing house Ediciones de la Flor, on Twitter. "All the good people of the country and the world will mourn him."

People left flowers in homage to the cartoonist in a sculpture of Mafalda and her caricature companions on a bench in the San Telmo neighbourhood of Buenos Aires.