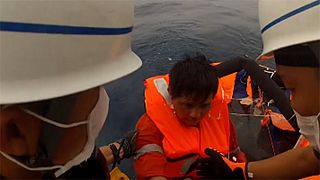 The survivor, Jay-nel Rosals, a Filipino deckhand, was wearing a life jacket and floating in a raft north of Amami Oshima island in the East China Sea, where rescuers have been searching for the Gulf Livestock 1 ship and its missing crew since it sent a distress signal early Wednesday.

He told them the ship stalled when an engine stopped, then capsized after being hit broadside by a powerful wave, and sank.

The Gulf Livestock 1, which was carrying 6,000 cows, issued a distress call early Wednesday as Typhoon Maysak passed through the area, setting off a desperate search for the 43 crew on board.