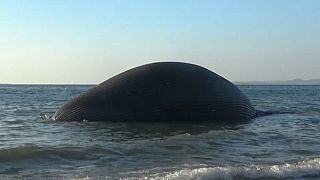 A 100-tonne blue whale was found dead, washed up on the coast of Indonesia.

Onlookers gathered on a beach in Kupang to look at the whale, which had been found by a fisherman on July 21.

Kupang Water Conservation Area Agency announced it has since moved the carcass further south on the island for its burial.

The waters around Kupang are known as a crossover area for cetaceans, such as dolphins and whales.