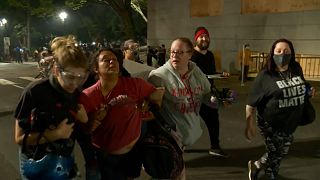 Tear gas was fired in Portland, Oregon, to disperse demonstrators in the US city late on Monday.

Portland has been the scene of anti-racism demonstrations since the death of George Floyd in Minneapolis in May.

Protesters have been clashing with US federal agents, sent to the city by Donald Trump to protect federal buildings. State and local officials have said the presence of federal agents are making the situation worse.

But US officials say militarised officers will remain in Portland until attacks on the federal courthouse cease - and more officers may soon be on the way.