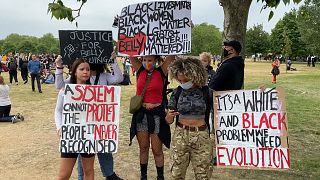 Thousands gathered in central London on Wednesday to protest the death of George Floyd.

The 46-year-old died on May 25 in Minneapolis after a police officer handcuffed him and knelt on his neck for eight minutes, including three in which he was unconscious.

In a video released after his death, he can be heard calling for help and pleading with officers that he couldn't breathe.

US protests against his death have spread to Europe, including one in London.

It saw demonstrators gather in London's Hyde Park before marching south through the city.

Most of the protesters wore masks or gloves and also chanted "black lives matter" and "we will not be silent".