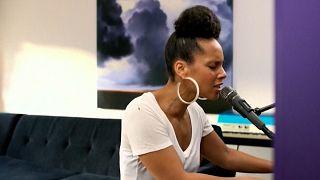 The artists were filmed with smartphones, cameras and audio equipment in their homes.

The event took place during the time slot of the iHeartRadio Music Awards, which was set to take place in Los Angeles earlier in March. It became part of a wave of postponements and cancellations because of the pandemic.

Some police officers and health care professionals spoke in between performances, with one ICU nurse in tears as she told viewers about her emotional day treating victims carrying the virus.

Elton John sang and also hosted the special that aired on Fox and iHeartMedia radio stations. He said he hoped "this entertainment will feed and fuel your soul".