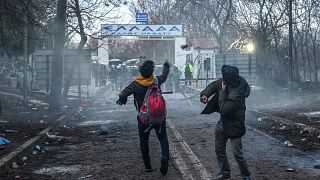 Greece claims to have stopped 4,000 migrants at Turkish border

Greece said on Saturday it has blocked thousands of migrants from illegally crossing its border from Turkey.

It comes after Ankara claimed on Friday it could no longer stop them from heading towards the European Union.

That followed the killing of dozens of Turkish soldiers by Syrian government airstrikes in the war-torn country's north-west.

Experts believe it is part of a strategy to push the EU into pressuring Russia to stop backing Damascus and agree to a ceasefire.

"Greece yesterday came under an organised, mass, illegal attack of violation of our borders and endured it," government spokesman Stelios Petsas said after an emergency meeting with Prime Minister Kyriakos Mitsotakis.

"We averted more than 4,000 attempts of illegal entrance."

Clashes erupted between Greek police and migrants at the border. Tear gas appears to be fired from the Greek side to push migrants away from the border.