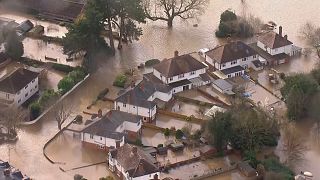 Aerial footage showed extensive flooding in the town of Hereford and the surrounding areas, as the River Wye burst its banks during extreme rainfall caused by Storm Dennis.

Some 480 flood warnings and alerts were issued across England on Monday by the country's Environment Agency, the highest number on record.

The storm's confirmed death toll rose to three after West Mercia Police confirmed a body had been found in the search for a 55-year-old woman who had been missing near Tenbury in Worcestershire since Sunday.

Clean up efforts have begun in parts of the UK that experienced widespread flooding, after the storm flooded roads, railways, homes and businesses, and disrupted travel across Britain.