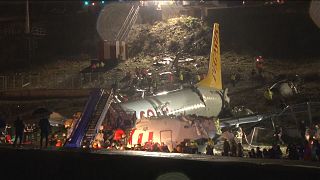 Video has emerged of the moment an airplane skidded off the runway and into a field at Istanbul's Sabiha Gokcen airport on February 5, 2020.

Three people died and 179 were injured when the plane left the runway after landing in bad weather, crashing into a field and breaking into pieces.

The aircraft caught fire and split into three.

Passengers had to evacuate through cracks in the smashed plane.

The low-cost Pegasus Airlines plane with 177 passengers and five crew on board was arriving at Istanbul from the western city of Izmir.

The transportation ministry described the incident as a “rough landing.”