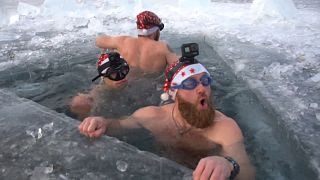 Instead of wetsuits and scuba diving gear, the trio wore just festive trunks and socks and Santa hats as they performed a brief underwater dance routine around the tree.

The mission near the village of Sarma was "both challenging and interesting", he said.

The tree was installed near the shore, at the depth of three metres, after the swimmers cut a hole in the thick ice.

They said the water temperature of just above freezing and an icy wind did not deter them.

But even though the men have several years of experience this week's dive was particularly difficult because they had to swim under the ice, Lesnoi said.

The men said they also wanted to promote clean living. The swimmers also removed several car tyres from the water, they said.