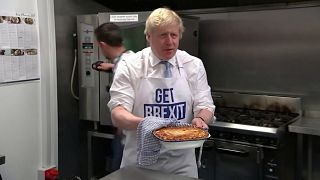 UK Prime Minister Boris Johnson and opposition leaders Jeremy Corbyn were making a late push on the campaign trail ahead of a pivotal election on Thursday.

Johnson was in Staffordshire where he drove a JCB digger with the slogan Get Brexit Done on it through a wall with the word Gridlock printed on it.

He urged the electorate to "remove the current blockage that we have in our parliamentary system" by voting Conservative.

Corbyn was filmed at a primary school in Morecombe helping some children to make paper reindeer decorations.

He told journalists he was not encouraging tactical voting in the election and urged everyone to vote Labour.

With two days until Britain's election, Johnson's final push to drive home his key message about Brexit was overshadowed by criticism of his ham-fisted response to the image of a sick child sleeping on a hospital floor and allegations that he exploited a terrorist knife attack for political gain.