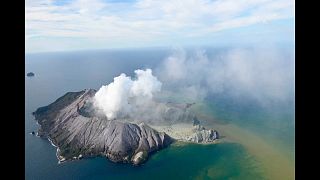 'We know that 23 people have been rescued,' says local journalist

Sarah Robson is a journalist with Radio New Zealand and she spoke to Euronews:

“The police estimate that there were 50 people on or around the island at the time of the eruption. We know that 23 people have been rescued from the island (so far), some of them had critical injuries, including serious burns. Many of those critically injured were flown to Auckland to a specialist burns unit.”

At least five people have died after a volcano erupted in New Zealand. Police say around 50 visitors were near the popular tourist site of White Island when the active volcano began erupting on Monday at 2 p.m. local time. Several people have been taken to hospital with critical injuries. The authorities are now planning to launch a search and rescue mission but say it is too dangerous to reach the area at the moment.

Watch journalist Sarah Robson's update from Auckland, New Zealand in the player above.