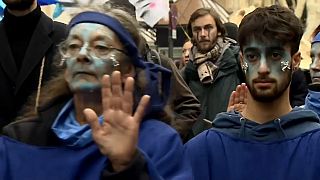 While policy-makers and activists gathered in Madrid for the second week of COP25 - the United Nations Framework Convention on Climate Change - various protests continued around Europe.

In the Spanish capital, dozens of Extinction Rebellion demonstrators marched through the main streets with a handmade whale skeleton to demand better protection of the oceans.

In Brussels, thousands formed a human chain which encircled the Belgian federal parliament and the Royal Palace.

"I'm with 'Grandparents For The Climate' and for about one year now, we've been supporting the youngsters who’ve been demonstrating on the streets for the climate.

“Many people laughed at them and didn’t take them seriously, but we did.

“So we came here to support them from the very beginning and we're still here."

In the UK, climate change activists blocked roads leading to Heathrow airport. The action was a protest against plans to build a new runway. There are fears of worsening air quality and increased noise pollution.

And in Paris, French activists held portraits of President Emmanuel Macron upside down, calling for bolder government action at the climate talks.

It comes as France remains behind its European neighbours in its use of renewable energy.