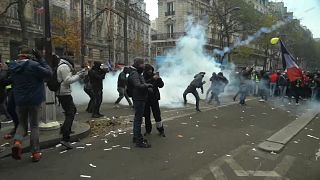 France brought to a near-standstill as enormous strike gets underway

Unions across France launched open-ended strikes on Thursday over the government's plan to overhaul its retirement system.

The protest led to a near total shut down of a number of transport hubs as 90% of trains and hundreds of flights were cancelled.

According to authorities, more than 180,000 union members participated in the protests across 30 French cities, which were met in some locations with tear gas from police.

It involved people from various different trades, including railway workers, teachers, emergency room medics and others.

Several unions - such as the General Confederation of Labour (CGT) - called the strike in order to try and force President Emmanuel Macron to abandon his plans to overhaul the country's pension system.

Macron wants to simplify the unwieldy system, which comprises of more than 40 different pension plans - many with different retirement ages and benefits.

One of France's biggest trade unions said that major nationwide strikes that started on Thursday will continue into next week, if necessary.