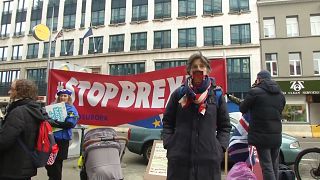 A small group of demonstrators gathered in front of the British embassy in Brussels on Thursday to protest against Brexit.

Demonstrators sang "Imagine" by John Lennon and changed the lyrics to adapt them to fit a Brexit context.

They were also protesting against the UK's policy to prevent British citizens living abroad for more than 15 years from voting in future elections.

Among the group were many EU civil servants who say their voices won't be accounted for in the snap ballot next week.

"I would like to see British people who have been outside, living outside of the UK for more than 15 years, given the vote. And I also would like to see Brexit stopped," explained Linda Geller, who worked for 23 years in Belgium at the UK representation as a commercial officer.