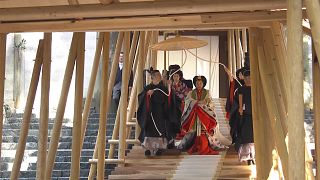 The Emperor, dressed in a traditional robe, traveled in a horse-drawn carriage on Saturday morning to the Inner Sanctuary.

It is dedicated to the Goddess of the Sun, the ancestor of the imperial family according to legend. The emperor was escorted by chamberlains carrying two of the three types of imperial Regalia to the main sacred palace. He offered a twig of a sacred tree and bowed before the sanctuary.

The empress arrived by car because she is allergic to horses. Dressed in a ceremonial kimono with a traditional hairstyle, the Empress bowed to the main sacred palace.