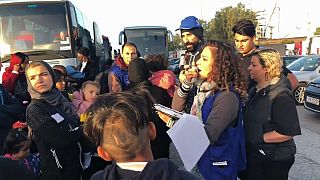 Catherine Woollard’s comments to Euronews’ Good Morning Europe came as the migrant issue in Greece and Bosnia was being discussed by the European Parliament on Thursday.

Earlier in the morning, more than 300 migrants from the Greek islands of Moria and Chios arrived in the port city of Piraeus in the Attica region to be relocated on the mainland

Catherine Woollard called for the removal of people from the islands and the ending of the policy of containment and relocation in other EU member states:

“The situation in Greece is the direct result of European policy and particularly the Greek-Turkey deal. So now the situation will also be exacerbated by the new law introduced by Greece."

At the beginning of November, Greece approved the tightening of its asylum procedures, attracting widespread condemnation from human rights groups and migrant advocacy bodies.

Woollard also condemned the treatment of migrants on the thresholds of the European Union:

“We see widespread violent pushbacks across the external border of the EU, including the border between Croatia and Bosnia.

“Nonetheless, this goes unpunished and the European Commission recently recommended that Croatia be allowed to secede to the Schengen Area, despite the documentation of violations at the border.

“This is exacerbating the humanitarian crisis in Bosnia where around eight thousand people are left in limbo.”