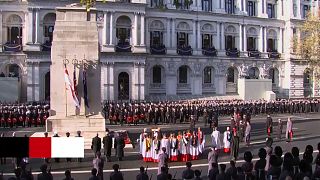 Queen Elizabeth II joined Britons in remembering their war dead, as the country's political leaders paused campaigning for the Dec. 12 election to take part in a somber Remembrance Sunday service in London.

The queen, dressed in black, watched from a balcony as her son and heir Prince Charles laid a wreath of scarlet poppies on the Cenotaph war memorial near Parliament.

The 93-year-old monarch, who served as an army mechanic during World War II, performed the wreath-laying for most of her 67-year reign but has cut back on her public duties.

An aide laid a wreath on behalf of the queen's 98-year-old husband Prince Philip, who has retired from public engagements.

The ceremony takes place every year on the nearest Sunday to the anniversary of the end of World War I at 11 a.m. on Nov. 11, 1918.

Thousands of military personnel, veterans and members of the public gathered in the streets around the Cenotaph to honour those killed in that war and subsequent conflicts.