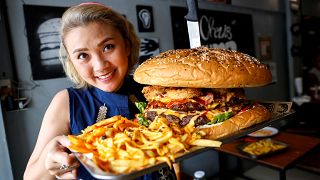 Weighing around six kilograms, composed of an estimated 10,000 calories, covered in fried onion rings, layers of bacon, and mayonnaise, this burger isn't for the faint-hearted.

Chris Steaks and Burgers of Bangkok, which specialises in large-portion meat dishes, is serving it up to customers as a challenge, promising a 10,000 Baht prize (€297) for those who can finish it within nine minutes.

"I will eat a burger at some point (in the future), but not any time soon," said Pakorn Porncheewangkoon, who recently stepped up to the challenge with two other friends and failed.

Restaurant owner Komdech Kongsuwan claims it's the biggest burger in Thailand and makes the effort to warn customers not to choke on it amid the time-constrained eating frenzy.

"I don't want all the customers to come in for the challenge, but I want them to enjoy the burger. If you're asking whether I worry about them (choking on it), I would say yes, I worry," said Porncheewangkoon.