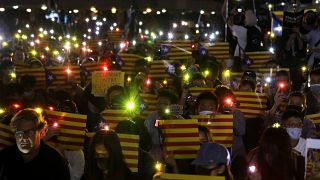 Hundreds of Hong Kong protesters, some waving Catalan flags and banners urging to "fight for freedom together", rallied in support of a separate Catalonia on Thursday (October 24), broaching an issue that is anathema to Hong Kong's Communist Party leaders in Beijing.

Organisers billed the event as a show of solidarity for the Catalan movement, which was sparked by fury over lengthy prison sentences for leaders of the region's separatist movement.

In Hong Kong's pro-democracy demonstrations, millions have taken to the streets for the past five months in sometimes violent clashes over what they see as China's tightening grip. Most protesters in the former British colony want greater democracy, among other demands, while a small minority is calling for independence.

In that sense, they share some common ground with separatist demonstrators in Spain's northeast region of Catalonia, which was rocked by protests after nine separatist leaders were sentenced this month to long prison terms for a failed independence bid in 2017.

Organisers were careful to skirt the issue, with online posters advertising the event with a slogan "United, we stand for freedom," but did not make any mention of secession.

There have been parallels been the two movements, with the Catalan protesters adopting fluid Hong Kong tactics inspired by martial arts legend Bruce Lee's "Be water" philosophy. Both movements have occupied airports to disrupt flights and Catalonia flags have been seen at Hong Kong rallies.

This rally in Hong Kong was held in a downtown garden, home to a cricket club in colonial days, one of the few to have obtained a permit from authorities in recent weeks.