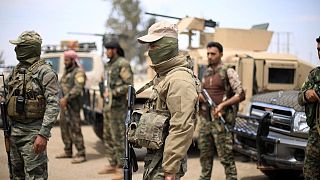 US President Donald Trump green-lighted a Turkish incursion into Northern Syria late on Sunday, drawing accusations of treachery and betrayal from Washington’s Kurdish allies on the ground in Syria

The Kurdish dominated Syrian Democratic Forces have served as a key US partner on the ground in the fight against IS in Syria.

The move has raised huge questions over security in the region, and the future of thousands of suspected ISIS members currently held in Kurdish custody.

The WH statement tonight on Syria after Trump spoke with Erdogan demonstrates a complete lack of understanding of anything happening on the ground. The “United States” is not holding any ISIS detainees. They are all being held by the SDF, which Trump just served up to Turkey. pic.twitter.com/vYr7j0q6mR

An SDF statement read, "despite our efforts to avoid any military escalation with Turkey and the flexibility we have shown to move forward with the establishment of the border security mechanism and [despite the fact that] we have fulfilled all our obligations in this regard, the US forces have not fulfilled their obligations and withdrew their forces from the border areas with Turkey to prepare for an invasion of northern and eastern Syria."

It added, "This Turkish military operation in northern and eastern Syria will have a significant negative impact on our war on ISIS and will destroy everything that has been achieved from the state of stability over the past years."

The White House statement said that Turkey would take responsibility for Imprisoned ISIS numbers currently held by the Kurdish authorities in Syria – they are thought to number in their tens of thousands.