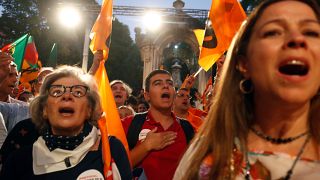 Portugal elections: the end of the 'contraption' coalition?

Portuguese voters will head to the polls this Sunday for parliamentary elections.

While incoming centre-left Prime Minister Antonio Costa is poised to win re-election, it is not clear if he will get an absolute majority in parliament.

Read more: Portugal elections: Who are the main parties?

Costa's ambition is to secure an absolute majority so he can govern without his Geringonça allies.

But according to opinion polls published on Wednesday, Portugal's ruling Socialists remain short of this majority, while support for the main opposition has surged.

Euronews looks at the stakes in the Portuguese election, one of the few countries in Europe defying the trends of declining centre-left parties and rising far-right movements.

While the term 'Geringonça' was coined pejoratively by the local press and right-wing parties, few people in Portugal would deny that it has worked.

The agreement between the Socialists (PS), the Communist Party (PCP) and the Left Bloc (BE) has led to four years of stability, with macroeconomic indicators applauded by the IMF as an example of recovery in Europe.

Unemployment, which was around 12% in the last elections, has fallen to 6.3%.

With this favourable economic context, Costa's party stood at 37% of voting intentions in the latest opinion polls.

However, a last-minute scandal could cost him his absolute majority.

In June 2017, weapons and explosives were stolen in Tancos, an important military warehouse near Lisbon. This scandal has splashed Costa's government just a few days ahead of the elections.

Former defence minister José Azeredo Lopes was accused on September 26 of denial of justice, prevarication and personal favour for his alleged involvement in the case.

Valued at 35,000 euros, the stolen devices, including grenades and ammunition, were found four months later less than 20 kilometres away.

The Portuguese Prosecutor's Office believes that the robbery was orchestrated by several soldiers to cover up one of their former companions and that the former minister knew it.

Lisbon-based journalist Aitor Hernández told Euronews that while this scandal won't cost Costa his second term, it may cost him his independence. Polls suggest he is losing in recent weeks the absolute majority he seemed to have in surveys conducted in early September.

"The Tancos scandal makes many voters remember the controversies of the previous Socialist government led by José Socrates, who is currently charged with numerous crimes of corruption and money laundering," Hernández said.

"There are voters who will read about the matter and vote for other parties to avoid concentrating power in the hands of a government splashed by such scandals."

If the Socialists fail to win the full majority, they would need the support of another party to pass legislation.

Just one large enough ally is now likely to be needed to secure a majority, and analysts say souring relationships with the hard-left could prompt Costa to seek a new partner or partners.

People, Animals and Nature Party to join the coalition?

One option could be the People, Animals and Nature Party (PAN), which has recently surged in the polls with a "pet-friendly" program.

Its leader André Silva, said he was available to support a future government.

"I see the emergence of this party as a consequence of a crisis that the democratic system is going through," said Margarita Correia, a linguist at the University of Lisbon.

Political fragmentation has been a feature of this year's elections as the number of parties campaigning to get seats has soared.

Portugal is one of only five EU countries without an elected far-right party in parliament - alongside Britain, Ireland and tiny Malta and Luxembourg - and the election is unlikely to change that.

Far-right parties PNR and Chega are currently polling below 1% each.

Far-right groups may have had more difficulty establishing themselves in Portugal than elsewhere because of its attachment to a young democracy that arrived only in 1974 after four decades of fascist dictatorship.

"People in Portugal have been socialised to a very multi ethnic society, even compared to Spain," said political scientist James Dennison, who researched far-right movements in Iberia.

With migrants long coming from its former colonies, including Brazil and Angola, Portugal has become accustomed to a flow of newcomers from far and wide.

Unlike most European nations trying to curb migration, Portugal wants more, seeing it as a way to tackle the problem of an ageing population problem.

"Portugal is a nutshell. It is a small country, quite stable, with a great political identity, where the essence of politics is to manage dependencies and navigate interdependence. It is an advantage of being a medium-sized European state based on a great identity that has been acquired over centuries and that leads to consensus," political scientist, José Adelino Maltez told Euronews.