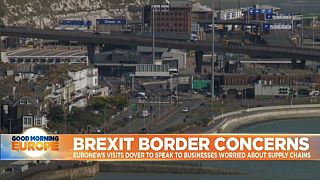 The Port of Dover is Europe’s busiest ferry port with billions of pounds worth of imports and exports travelling through it each day. Some of the goods being transported are referred to as “just in time” goods such as car parts that allow manufacturers to adapt with supply and demand needs.

Another key item transported through the port is perishable goods like fruit that depend on a timely transfer to retain freshness. But with Brexit day looming, business owners in Dover say they are concerned that any delays at the border could impact operations inside the Port.

Christine Wolfe relies on the delivery of fresh flowers from Holland and Italy, and she told Euronews her entire business relies on the ability to get her stock quickly from the continent.

“I can add 20 red rose roses to my order coming from Holland tonight, it will be here tomorrow and we can deliver it to that shop by 6 o’clock tomorrow morning. This could change,” she said.

“We are having to prepare for something that may not happen. If it’s a deal we will carry on doing what we are doing. If it’s a no deal - I think everyone is just waiting to see what happens. It’s very frustrating.”

The UK government has published guidelines for businesses on what to do if the UK leaves the EU without a deal. It’s spent millions of pounds preparing for Brexit. The Port of Dover says it has extra resources and made major investments itself as it understands that it has become Britain’s “just in time conveyor” belt.”

But not all businesses are convinced. Those in the logistics industry rely on just in time goods, particularly from countries like Germany and Holland to the UK.

“If every truck has to wait for clearance, say on average 5 hours, I mean you can work out how that’s going to impact our industry, you know there’s going to be massive delays on this side of the channel and on the other side of the channel,” said Ronald Krom, a hauler from Promax Logistics.

“My job totally depends on the free flow of goods import and export. If that doesn’t happen anymore I’m incredibly worried about losing my job," he said