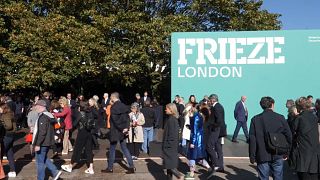 It's just one of the prestigious contemporary art works on show at the event.

This year's Frieze is marking the 100th anniversary of the founding of the Bauhaus school in Germany, with a series of talks and works.

This year's Frieze is playing host to over 160 galleries from 35 countries.

One international gallery attending is New York-based Gagosian. Their display is called "HELIOS", which takes its name from the ancient Greek sun deity. There are paintings, collages and sculpture.

New for 2019 is a curated section, dedicated entirely to woven works. Curator Cosmin Costinas has gathered eight international artists that experiment with the technique.

It is showing woven items have more to offer than just function.

The section includes Hong Kong based artist Angela Su, who uses hair embroidery in her work. The hair was taken from a wig maker.

Created during months of turbulent protests in Hong Kong, Su's works reframe sewing — traditionally seen as a gentle activity — into an extreme form of protest.

One shows an eye sewn shut by real human hair, a reference to a lack of freedom of expression.

Ultimately, art fairs are about selling works and this year's Frieze is no exception.

For those with money to spare, British artist Ryan Gander is presenting a new iteration of his project "Time Well Spent."

It is a black vending machine. For £500, visitors can make a purchase and be randomly rewarded with either a rock or a diamond.

Gander says it explores the value we place on objects and the value of time, rocks and diamonds both take hundreds of years to form.

'Culture of impunity' across EU over violence against migrants: NGO