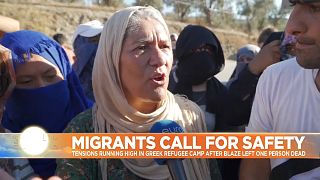 Angry women are leading protests in one of Europe's largest migrant camps after a fire left at least one person dead.

Tensions are high after the blaze at the vast and overcrowded Moira camp, on the Greek island of Lesbos.

Fatema Ebraimi, an Afghan refugee, told Euronews: “We are protesting for our dead friend. We want justice, we don’t want to mourn more innocent lives.

"Women in Moria are scared, we cannot leave our tent when it gets dark. We cannot go to the toilet.”

Soghra Bayat is another Afghan refugee and she claims the authorities are hiding the truth about Sunday’s fire:

“Women are screaming for safety and dignity. We know that on Sunday, because of the fire more people died, not only one woman. But authorities are lying.”

Fazel Obaid is at the camp with his pregnant wife. They know they are likely to spent quite a few months in there as they have just arrived. The young couple have nothing but a tent/

“We came last Friday, my wife and I now are in Moria camp," he said. "We expected a better place. During these days, nobody paid any attention to us, because my wife was at the hospital for three nights on the island of Lemnos. Here, we are being ignored. Nobody cares if we are human or not."

The governor of the northern Aegean region of Greece, Kostas Moutzouris, believes that the situation in the camp might have wider implications.

“The situation resembles a powder keg and [it] can explode at any time," he said. "I fear for the safety of our people, of the residents of Lesbos. For the situation to change, many refugees have to be transferred to the mainland and new arrivals from Turkey must be stopped. If not, we are doomed.”

He went on to say that Turkey doesn’t have the political will to solve the issue.

About 250 migrants boarded a ferry on Lesbos headed to the mainland on Monday as part of government efforts to tackle massive overcrowding.

Greece's government has announced it would accelerate efforts to move thousands more to the mainland.

Moria is covered in rubbish and the flow of refugees isn't slowing down. It is estimated 12,000 people — more than four times the site's capacity — are currently housed at the camp and just outside its perimeter.

Watch the Euronews report from Lesbos in the player above.