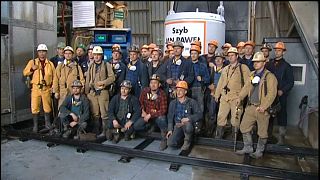 With just three weeks to go to a general election, Poland has opened its first new coal mine for 25 years.

In the country’s large mining communities, the promotion of the coal industry is seen as a likely vote winner for the ruling Law and Justice Party (PiS).

But environmentalists argue the policy flies in the face of European Union targets for all member states to be carbon neutral by 2050.

Anton Lazarus, communications manager at the European Environmental Bureau, said Poland risks losing out on a valuable source of future jobs if it turns its back on the green transformation of energy.

Watch the interview with Lazarus in the video player, above.

PiS has also said it wants to introduce legislation that will allow the government to open new coal mines without the approval of local authorities.

"This special legislation, which is being prepared by lawmakers is related to the fact that local authorities are not interested in new mines being built in their areas while we will need new coal deposits to secure supplies for the energy industry," energy minister Krzysztof Tchorzewski told reporters at the opening of the new mine.

Tchorzewski said the new legislation would help Poland develop the planned lignite open-pit mine Zloczew, which environmentalists say would be the country's deepest-ever open-pit mine and would displace 3,000 people from their homes.

Lazarus argues "this is not a positive future for Poland", adding young people there "understand there is no future for coal".

"People in Poland don’t want this mine, they want to share in the same benefits of clean, green, renewable energy and all of the safe and secure jobs that can come with that, that other EU countries are looking forward to in the future," he told Euronews.

"The Polish government is determined to ignore the wake-up call which was sounded by the youth ahead of the Climate Summit in New York," said Joanna Flisowska, senior coal policy coordinator at Climate Action Network (CAN) Europe.

"As the Polish Government inaugurated the start of construction works on a new coal mine just a day after the Summit, it has clearly demonstrated it has no intention of quitting its addiction to the most polluting of fossil fuels.

"Even more alarmingly, the Polish Government is now forcing through a new law which would allow it to open new coal mines without the consultation or permission by affected local communities.

"That includes the new open-pit coal mine for the EU’s biggest climate-killer, the infamous Belchatow coal power plant, which would displace more than 3,000 people.

"At the same time, the Polish Government seeks funding for just transition of coal regions.

"But instead of undertaking the clean energy transition, it only wants the EU money, to pay for its coal addiction.”

Coal has become a hot issue ahead of the parliamentary vote on October 13 with PiS trying to secure coal miners' votes while facing down criticism from environmentalists.

PiS is leading in opinion polls, with the biggest opposition party, Civic Coalition, wanting to cut out coal completely by 2040.

Meanwhile, environmental group ClientEarth has filed a lawsuit against the owner of a coal-fired power plant in central Poland, calling for it to stop burning the polluting fuel and reduce its carbon emissions to zero by 2035.

The plant at Belchatow is Europe’s biggest of its kind and accounts for a tenth of Poland’s total CO2 emissions. It is owned by state-run PGE, Poland’s largest energy group.

“This is a first-of-its-kind lawsuit, seeking to hold coal plant operators to account for the direct impact their operations have on the climate and the surrounding environment," said Marcin Stoczkiewicz, head of central and eastern Europe at ClientEarth.

"To protect the planet we rely on, we need to see a drastic reduction in carbon emissions and we are using litigation to accelerate the process.”

Poland, which generates most of its electricity from coal, led a handful of eastern European Union states in blocking a push by France and most others to commit the bloc to net zero emissions by mid-century in June.