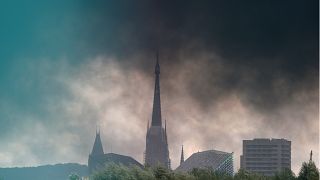 A large fire broke out in the early hours of Thursday at a French factory in the northern port city of Rouen, local authorities said.

They added there were no reports of victims at this stage. The fire at the factory of Lubrizol - a company that makes specialty chemicals - started around 2.40 am local time.

Around 130 firefighters were tackling the blaze at the site, and a security cordon had been put in place.