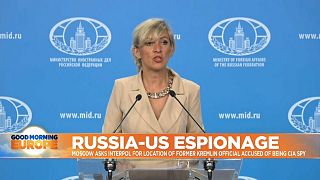 Russia has asked the United States via Interpol to confirm the whereabouts of a former Kremlin official who Russian media have said may have been a U.S. spy extracted by the CIA. Foreign Ministry spokeswoman Maria Zakharova said Moscow learned via U.S. media that Alex Smolenkov and his family were in the United States and that the Kremlin was working to confirm this information.

Zakharova went on to say: “Of course, this information needs checking with all the required procedures and standards. In this case, through Interpol, we posed a question to Washington about the disappearance of a Russian citizen and him being in the U.S."

Smolenkov was reported to have disappeared with his wife, Antonina, and three children while on holiday in Montenegro in June 2017. Russia’s Foreign Ministry spokeswoman Zakharova said Russia had opened a criminal case after their disappearance.

Watch Galina's report for Good Morning Europe in the player above