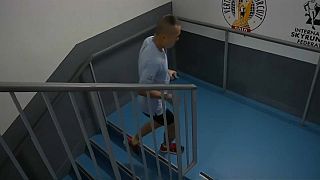 Elite and amateur athletes tackled one of Beijing's tallest buildings in the city's seventh annual vertical run on Saturday (August 31).

Around 900 participants from 32 different countries climbed the 82 floors of East Beijing's China World Summit building, covering a total of 2,041 steps.

With the finish line 330 metres above ground level on the building's roof, it was a gruelling task.

The queen of the Beijing vertical run, Suzy Walsham from Australia, picked up her 7th straight victory in the elite women's race, finishing in a time of 11 minutes 59 seconds that was only bettered by the top three men.

Ryoji Watanabe from Japan took victory in the men's race in a time of 10 minutes 37 seconds, 32 seconds ahead of his rivals, as he improved on last year's second-placed finish.

The Beijing vertical run is part of an annual vertical world circuit which covers skyscrapers in cities across the world including Milan, Paris, London, Shanghai, Dubai and Hong Kong.

Both Walsham and Watanabe are targeting top spot in the rankings when the season reaches its climax in Hong Kong on December 1.