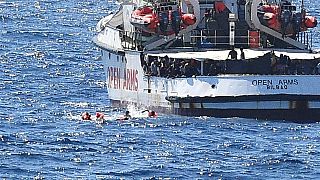 'People can die if we don’t act,' says founder of migrant rescue NGO

Axel Steier is a co-founder of German NGO Mission Lifeline which operates the Eleonore, a migrant rescue ship currently stranded off the coast of Malta.

There are more than 100 migrants aboard the ship. They were rescued around 31 miles off the coast of Libya when the boat they were in began to sink.

He told Euronews that during the rescue, the Eleonore was accosted by the Libyan coast guard.

“During this rescue the Libyan coast guard approached, they came very, very close to the migrants and our boat, it was a dangerous situation.”

“We found a rubber boat in distress, we had to rescue the people because the boat was already deflating, which means the people can die if we don’t act,” he added.

It comes after the Spanish rescue ship operated by the NGO Open Arms spent almost three weeks at sea earlier this month, after being denied permission to disembark by several European countries. Spanish lawmakers are set to discus the ship's predicament later today in parliament.

The UN said yesterday that the total number of migrants who had drowned attempting to cross the Mediterranean since the start of 2019 had risen to 900, after 40 drowned off the coast of Libya earlier this week.

Watch the full interview in the player above.