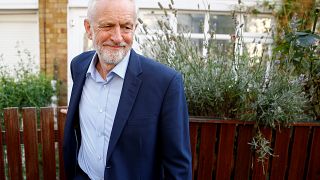 Five of Britain's opposition parties said on Tuesday that they would work together to pass legislation to avoid a no-deal Brexit.

The "productive and detailed" meeting of party leaders, held in the morning, was convened by Labour's Jeremy Corbyn and included the Liberal Democrats, the Scottish National Party (SNP), the Greens, Plaid Cymru, the Independent Group for Change.

They accused Prime Minister Boris Johnson of using "anti-democratic means to force through a no-deal" after he suggested that parliament could be suspended to prevent it stopping Britain from crashing out of the European Union on October 31.

Corbyn later sent a letter to 116 Conservative or independent lawmakers who voted against a hard Brexit.

Recipients of the letter include former prime minister Theresa May, the former chancellor of the exchequer Philip Hammond and Greg Clark.

The leader of the main opposition party wrote that in his view "holding a general election after an extension is achieved is the simplest and most democratic way to prevent No Deal and to let the people of this country decide our future."

He urged them to meet with him and other members of the opposition "to find a way for the clear will of parliament against No Deal to express itself."

Speaking to Euronews, Tim Bale, professor of politics at the Queen Mary University of London, said that the legislative route for parties preventing Brexit was twofold.

The opposition could either get control of the parliamentary timetable and use it to push through a piece of legislation that mandates the government to ask for an extension of Article 50, the clause in the EU Lisbon Treaty that begins a country's withdrawal from the block.

Or it could ask the prime minister to revoke Article 50 altogether, which would pave the way either for a second referendum or an end to Brexit altogether.

The focus on a legislative solution to preventing no deal suggests that opposition leaders have cooled on the idea of a "caretaker government" which could take power if Johnson was to lose a vote of no confidence when parliament returns in September.

Corbyn had initially suggested that he could lead such a government, a prospect that was rejected by the Liberal Democrat leader Jo Swinson as well as by many voices from within the Labour Party, who suggested a moderate Labour or Conservative voice would be better served to fill the role.

“It seems very very unlikely. You have had a number of MPs say that this is not going to happen," said Bale.

Johnson, meanwhile, has reaffirmed his commitment that the UK "has got to come out" of the EU on October 31.

"I think that it's the job of everybody in Parliament to get this thing done. I think it's what the people want. I also think by the way it's what our friends and partners on the other side of the channel want," he told reporters as he prepared to fly home from the G7 Summit in Biarritz, France.

Punters seem to have sided with him with 67% of gamblers putting their money on the UK leaving the bloc this year without a deal, according to Oddschecker.