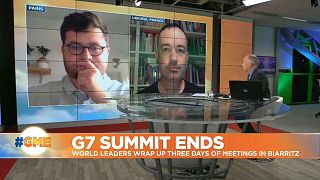 Has the gathering simply become an expensive and over-hyped talkfest?

An emergency meeting about the Amazon forest fires, a row with the Brazilian president, new taxes for digital companies and a surprise visit by Iran's foreign minister, President Macron's hosting of the G7 summit in the seaside town of Biarritz featured action and drama.

For some analysis on what the leaders gathering achieved, Euronews’s Good Morning Europe spoke to Thomas Friang who is President of Institute Open Diplomacy and co-chair of the ‘Y7 youth summit’ and Arturo Villanueva from the ‘Alternative-G7 summit’.

Friang said: “The most valuable outcome of this summit is the hope for having a steering group of global governance still exists.” He added: “We were mostly afraid the G7 would split between the remaining liberal democracies like France, Canada and Germany and the decreasing liberal democracies, including the U.S., which is now led by a white supremacist president.”

“When we talk about climate change it is a G6 plus 1 with the U.S. not taking enough responsibility to fight climate crisis,” he went on to say.

Villanueva says the politics of the G7 are outdated and only at the service of the rich:

“In face of the economic and climate disaster that the G7 brought to the world, they try to hijack our agenda – they say they were against climate change, they were going to fight inequality and they were even feminists.”

The Amazon rainforest was a very hot topic for the G7 leaders, who have offered Brazil U$20 million of emergency aid to tackle the wildfires raging there. But Brazil has rejected the offer saying the situation is under control.

President Jair Bolsonaro's chief of staff slammed the proposal, saying the G7 should save the money to reforest Europe instead, and that France had no right to lecture other governments following the Notre Dame Cathedral fire.

Nearly 80,000 blazes have broken out in the Amazon so far this year, and the crisis has sparked a bitter war of words between Brazil’s President Jair Bolsonaro and French President Emmanuel Macron.

Watch Good Morning Europe's analysis of the G7 summit in the player above.