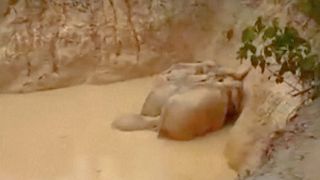 Elephants saved after getting stuck in muddy pond

Five elephants were rescued this week after getting trapped in a large muddy hole in Malaysia.

Local media reported that the elephants were found stuck on August 20 in an abandoned illegal mining pool, located in Pahang's forest reserve, about 200 kilometres east of capital Kuala Lumpur.

Video filmed by Malaysia's Department of Wildlife shows the herd, including a young elephant, gathering together closely, as an excavator digs a path for them to climb out. Crowds of people can be heard cheering as the elephants walk free after the four-hour rescue operation.

Malaysia's Department of Wildlife received information about the distressed elephants from indigenous people and told local media that the elephants were believed to have been trapped for two to three days.